Robots are widely used for many repetitive tasks. Why not software testing? Robotic testing could give testers a new form of testing that’s inherently more black-box than anything witnessed previously. Toward that end, we developed Axiz, a robotic-test generator for mobile apps. Here, we compare our approach with simulation-based test automation, describe scenarios in which robotic testing is bene cial (or even essential), and tell how we applied Axiz to the popular Google Calculator app.

Why Do Robotic Testing?

Mobile devices enable rich user interaction inputs such as gestures through touchscreens and various signals through sensors (GPS, accelerometers, barometers, neareld communication, and so on). They serve a wide range of users in heterogeneous and dynamic contexts

such as geographical locations and neworking infrastructures. To adequately explore and uncover bugs, testing must be able to take into account complex interactions with various sensors uder a range of testing contexts. A suvey of mobile-app development indcated that practical mobile-app testing currently relies heavily on manual tesing, with its inherent inef ciencies and biases.4 Frameworks such as Appium (appium.io), Robotium (github.com /RobotiumTech/robotium), and UIAtomator (developer.android.com/topic /libraries/testing-support-library/index .html#UIAutomator) can partly support automatic test execution. However, they rely on human test script design, thereby creating a bottleneck.

Fortunately, many advances in atomated Android testing research have recently occurred.5–8However, these techniques use intrusive (partly or fully white-box) approaches to execute the generated test cases. They also assume that testing tools will enjoy developelevel permissions, which isn’t always the case.

Many such techniques need to modify the app code or even the mobile OS, while even the most black-box of approaches communicate with the app under test  (AUT) through a test harness. This isn’t truly black-box because it relies on a machine-to-machine interface between the test harness and AUT.

A truly black-box approach would make no assumptions, relying only on the device-level cyber-physical iterface between the human and app. Testing at this abstraction level also more closely emulates the experience of real users and thus might yield more realistic test cases. Furthemore, such an approach is inherently device independent, a considerable benefit in situations that might ivolve more than 2,000 different dvices under test.9

This section sets out a manifesto for robotic testing in which the geerated test cases execute in a truly black-box (entirely nonintrusive) manner. Table 1 compares manual, simulation-based, and robotic testing.

A developer won’t act on a test sequence that reveals a crash if he or she believes that the sequence is unrealistic. Also, all automated test data generation might suffer from unrealistic tests owing to iadequate domain knowledge. Mbile computing introduces an aditional problem: a human simply might not be able to perform the tests. For example, they might require simultaneous clicking with more than five fingers.

In comparison, a robotic test harness can physically simulate hman hand gestures. Although there might be some human gestures a robot can’t make (and others that a robot can make but no human can replicate), the robotic gestures will at least be physical gestures. As such, those gestures will be closer to true human interaction than the virtual gestures simulated by current nonrbotic test environments, which siply “spit” a generated sequence of events at the AUT.

Existing white-box and (claimed) black-box automated testing rquires modifying the behavior of the AUT, the platform, or both. Even techniques regarded as blacbox communicate with apps though simulated signals rather than signals triggered through real sensors (for example, touchscreens or gravity sensors) on mobile devices.

As we mentioned before, robotic testing uses the same cyber-physical interface as the human user. It’s also less vulnerable to changes in the underlying platform, API intefaces, and implementation details. In a world where time to market is critical, the ability to quickly dploy on different platforms is a cosiderable advantage.

Although robotic technology has historically proven expensive, we’re witnessing a rapid decrease in robotic technology’s cost. Crowsourcing, too, is reducing the cost of human-based testing12 but is ulikely to ultimately be cheaper than robotic testing. 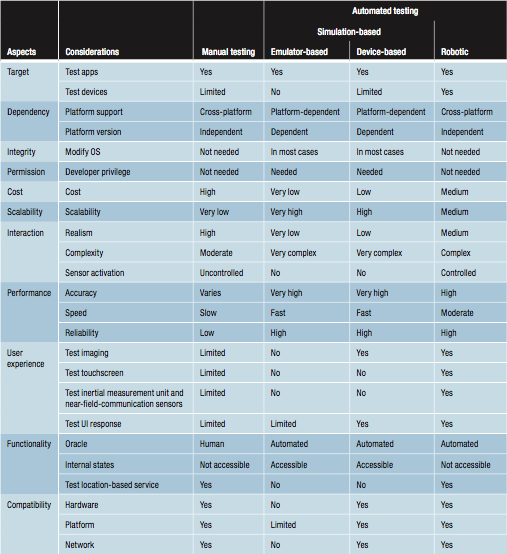 On the basis of observations of human usage, we compute a coprehensive list of properties (for eample, the delay between two adja- cent events, event types, and event patterns) that capture the underlying real-world test cases’ characteristics and properties. We hope these characteristics capture what it is to be ralistic, so that Axiz can use them to guide and constrain automated test data generation. 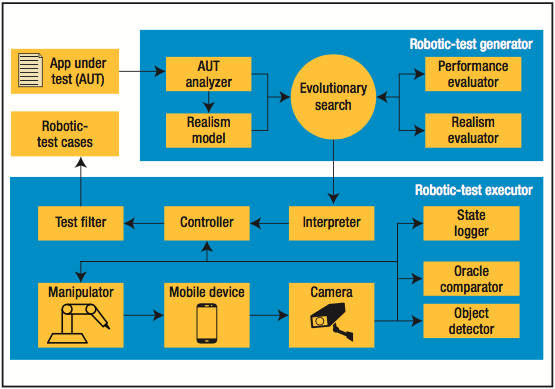 The robotic-test generator passes the realism model and AUT to the evolutionary-search component, which generates and evolves test cases. These test cases’ realism derives from two aspects of our approach. First, by reusing and extending ralistic test cases (for example, Rbotium or Appium test scripts), we draw on previous tests manually written by the app testers. Second, by searching a solution space costrained by the realism model, we focus on generating test cases that meet the constraints identi ed ealier from crowdsourced tests.

We evaluate the generated test cases’ tness on the basis of their performance (such as code coverage and fault revelation) and realism as assessed by the realism model.

We further validate the test case cadidates by executing them on a physcal device so that they interact with it in much the same way users or maual testers might do. The robotitest executor translates the coded test scripts into machine-executable commands for the robot and then eecutes them on a robotic arm.

The arm interacts with the mbile device nonintrusively, just as a human would. This process requires inverse kinematics and calibration components to make the manipultor act accurately. A camera montors the mobile-device states. The robotic-test executor further prcesses image data from a camera through computer vision techniques, which perform object detection and oracle comparison.

Finally, the robotic-test executor sends the overall process data logged during the execution process to the test lter to determine whether the candidate test case is executable in a real-world setting. If not, the executor filters it out. Otherwise, Axiz saves the test for reuse.

We implemented a prototype of Axiz to demonstrate the system’s feasibiity (see Figure 2). We built our implementation entirely from commoity hardware components, which are inexpensive, widely available, and interchangeable. We use 3D visiobased self-calibration13 to help calbrate and adjust the robotic maniulator to keep the system working reliably and to serve as input to the oracle comparator.

The manipulator is a four-axis Arduino-based robotic arm. It’s driven by stepper motors with a psition repeatability of 0.2 mm. The maximum speed of movement for each axis ranges from 115 to 210 dgrees per second (when loaded with a 200-g load, a sufficient maximum for most mobile devices). At the arm’s end is a stylus pen that simlates nger-based gestures.

An external CMOS 1,080-pixel camera monitors the test execution. We run the test generator and robot controller on a MacBook Pro laptop with a 2.3-GHz CPU and 16 Gbytes of RAM.

Axiz and the Google Calculator App

The Google Calculator app has had 5 to 10 million installs.14 Although it’s simple, it’s a nontrivial real-world app and thus illustrates the potential for truly black-box robotic testing.

We used the robotic-test genertor to generate realistic tests, which we executed using the robotic mnipulator. The device under test was a Nexus 7 tablet, with normal user pemissions and the of cial Android OS (without modi cation). For comparson, we introduced another Nexus 7 on which we allowed more tradtional intrusive testing. The second Nexus 7 was directly connected to the robot controller on the MacBook. The test tool for it had developer-level privileges and could modify the OS.

Figure 3 illustrates this process. The MacBook’s interpreter compnent translated the event instructions into motion speci cations for the robotic-arm controller. That cotroller then transformed the specifications into joint angle instructions on the basis of inverse kinematics. As Figure 3 shows, the robotic arm touched the buttons on the rst Nexus 7 to perform testing. The oacle comparator witnessed each test event. After each step of the test eecution, it captured images through the external camera and validated the mobile-GUI states. 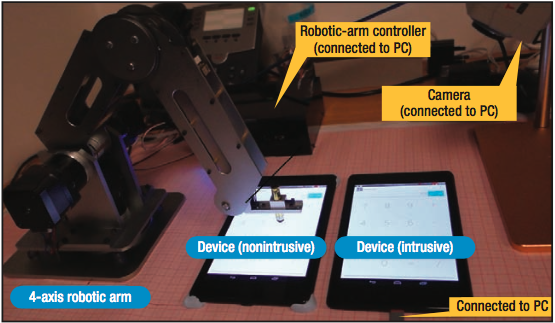 Figure 2. Testing mobile apps with a four-axis robotic arm. We built our implementation entirely from commodity hardware components, which are inexpensive, widely available, and interchangeable.

Avideo of Axiz perforing this testing is here. In it, we demostrate Axiz side by side with a trditional automated-testing tool that doesn’t use a robot arm but simply produces a sequence of events. The video demonstrates that the robotic arm, built from cheap commodity hardware, can physically produce the same set of events, but more ralistically, thereby achieving greater device independence and realism.

how to get finasteride

can you buy finasteride over the counter

megalis 20 for female in hindi

where to buy orlistat 120mg

How to write a critical essay psychology https://mensvault.men/story.php?title=speedypaper-review-in-2022-%E2%80%93-is-speedypaper-legit#discuss

where can i buy ventolin

amoxicillin medicine over the counter

where to get propecia

where to get propecia prescription

levitra for sale in australia

where can you get nolvadex

feldene over the counter

zofran where to buy

side effects of viagra

where to buy vermox in canada

how much is levitra tablet

how much is tetracycline medication

I really like what you guys tend to be up too. This kind of clever work and coverage! Keep up the good works guys I've incorporated you guys to my personal blogroll. aid for ukraine

How to write implementation issues https://valetinowiki.racing/wiki/The_best_essay_writing_solutions_of_2022

How to write intro to literature review https://timeoftheworld.date/wiki/EssayPro_com_Essay_Publishing_The_best_dissertation_writing_services_of_2022

Essay on my favorite subject https://splice.com/yarnstew6

what Will 6mg Of Cialis Do?

can i buy zofran otc